The issue began in 2011 when the non-profit group Children of God for Life (CGL) first broke the news about Pepsi’s alliance with Senomyx, which led to massive outcry and a worldwide boycott of Pepsi products. At that time, it was revealed that Pepsi had many other options at its disposal to produce flavor chemicals, which is what its competitors do, but had instead chosen to continue using aborted fetal cells — or as Senomyx deceptively puts it, “isolated human taste receptors” (http://www.naturalnews.com).

A few months later, Pepsi’ shareholders filed a resolution petitioning the company to “adopt a corporate policy that recognizes human rights and employs ethical standards which do not involve using the remains of aborted human beings in both private and collaborative research and development agreements.” But the Obama Administration shut down this 36-page proposal, deciding instead that Pepsi’s used of aborted babies to flavor its beverage products is just business as usual, and not a significant concern.

“We’re not talking about what kind of pencils PepsiCo wants to use — we are talking about exploiting the remains of an aborted child for profit,” said Debi Vinnedge, Executive Director of CGL, concerning the SEC decision. “Using human embryonic kidney (HEK-293) to produce flavor enhancers for their beverages is a far cry from routine operations!”

To be clear, the aborted fetal tissue used to make Pepsi’s flavor chemicals does not end up in the final product sold to customers, according to reports — it is used, instead, to evaluate how actual human taste receptors respond to these chemical flavorings. But the fact that Pepsi uses them at all when viable, non-human alternatives are available illustrates the company’s blatant disregard for ethical and moral concerns in the matter.

Back in January, Oklahoma Senator Ralph Shortey proposed legislation to ban the production of aborted fetal cell-derived flavor chemicals in his home state. If passed, S.B. 1418 would also reportedly ban the sale of any products that contain flavor chemicals derived from human fetal tissue, which includes Pepsi products as well as products produced by Kraft and Nestle (http://www.naturalnews.com).

Sources for this article include:

With a tweet thanking God and declaring onwards to victory, Venezuelan president Hugo Chávez arrived home from Cuba yesterday, to the delighted of his supporters.

Fireworks were set off in some Caracas neighbourhoods as news spread and celebrations began among Chávistas, as his most fervent supporters are known. Government ministers were jubilant with one singing “He’s back, he’s back!” live on state TV.

They asked Chávez ’s euphoric supporters to respect the peace of patients at the military hospital, near a hillside shanty-town. Soldiers guarded the installation, while supporters chanted, “We are Chávez !” and “He’s back, he’s back!” At one point, medical staff asked them to quieten down.

The 58-year-old socialist leader’s homecoming in the middle of the night two months after cancer surgery in Cuba implies some medical improvement – at least enough to handle a flight of several hours.

Chávez could simply be hoping to quieten political tensions and smooth a transition to vice-president Nicolas Maduro, whom he has urged voters to back should he have to stand down and a new presidential election is held.

“We have arrived back in the Venezuelan fatherland. Thanks, my God! Thanks, my beloved people! Here we will continue the treatment,” Chávez tweeted after flying in. 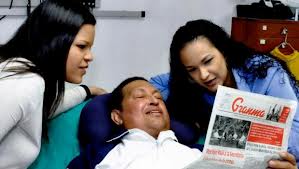