Reilly- Like He Hasn’t A Primary Care In The World

James Reilly at government buildings holding the expert group report on the need for new abortion legislation, which was published yesterday.

‘You didn’t really think I’d read it, did ye? Hahahahaha’

Looks like he puts away 100 Carrolls and a case of Powers a day.

But then one of the prerequisites for being Minister for Health is that you cannot run 10 yards without serious risk of a coronary?

via Like He Hasn’t A Primary Care In The World | Broadsheet.ie.

via Like He Hasn’t A Primary Care In The World | Broadsheet.ie. 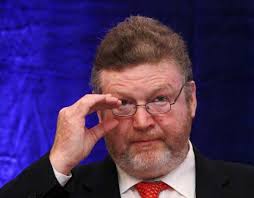 Reilly is Breaking the Law

Breaking the Law Is Criminal

Minister for Health James Reilly is breaking the law and rejecting international human rights principles by failing to remove an upper age limit for an allowance to people with disabilities, according to a report by Ombudsperson Emily O’Reilly.

Minister for Health James Reilly is breaking the law and rejecting international human rights principles, by failing to remove an upper age limit for an allowance to people with disabilities, according to a report by Ombudsperson Emily O’Reilly.She says it, “raises fundamental questions about the strength of our commitment to international human rights norms.The continued failure of the department to tackle this issue, suggests it has a very weak sense of the importance of supporting human rights principles and indeed, a very weak sense of the rule of law and of its obligation to act in accordance with the law.’Ms O’Reilly further said, “I have sympathy for the Government and the rest of us who are about to come under the cosh with €3.5 billion reduction in terms of the money that can be spent on public services but I think it is simply unacceptable for the State to act outside the law. I think basically they are trying to string this out. They have to remove the cap.” Ms O’Reilly also said, that when the scheme was originally introduced in 1979 the upper age limit was legal, however when the Equal Status Act became legislation in 2000, the State could no longer discriminate on grounds of age.The report also says the O’Reilly’s department, has been operating a scheme for the past 12 years, on the basis of a condition that was illegal and that it has known to be illegal for the past four years. Despite having agreed last year to remove the upper age limit from the scheme, it failed to do so. As a consequence, it has knowingly allowed the scheme to continue in operation on the basis of an illegality.

via Reilly is Breaking the Law – Indymedia Ireland.

via Reilly is Breaking the Law – Indymedia Ireland.

The death of James Reilly Minister of Health

Enda Kenny and James Reilly the Health Minister are out on the golf course when all of a sudden, Reilly collapses .He doesn’t seem to be breathing, and his eyes are glazed. Kenny whips out his phone and calls the emergency services. He gasps Reilly is dead! What can I do? The operator says calm down. I can help. First lets make sure he is dead. There is a silence then a shot is heard. Back on the phone, the guy says “ok  now what”

James Reilly Lies again and Quinn gets it Wrong

Dr James Reilly the Health Minister has once again spectacularly changed his story on the site selected for a primary care site in his constituency.

Dr. Reilly claimed the decision on the site was made during Mary Harney tenure in office. Ruairí Quinn the Minister for Education backed up this claim.

Reilly now admits that this information is totally incorrect.

James Reilly in a Fix once again

It appears the owner of the land on which the divisive health centre is to be built is a well-known supporter of FG.

Seamus Murphy who is in the process of selling it to a development company owns the land in question.

Both Reilly and Murphy have been pictured together at social events in Balbriggan.

One wonders if the development company has links to Reilly.

Above Reilly,Joe English and Seamus Murphy

MINISTER FOR Health James Reilly has given a new rationalization for his decision to add two locations in his Dublin North constituency to a list of primary care centers.

Last night Dr Reilly said both Swords, and Balbriggan were recognized as high-priority areas by the HSE five years ago. However, both “lost out” after Minister of State Shortall increased the weighting and they were swept from high priority to low priority. Under the original priority system, Reilly stated they both would have been in the top 35. Conversely, under the new system with an altered weighting system, they ended down the list.”

However, we now know this is a blatant lie as Balbriggan was ranked in forty fourth position and Swords in one hundred and twenty seventh place before Ms. Shortall ordered officials to change the weighting related to deprivation.

One wonders how much longer the Taoiseach Enda Kenny can continue to support Reilly.

Mr Kenny said Mr Reilly had given an account of his personal interests to the Dáil, and he rejected Sinn Féin‘s Mary Lou McDonald’s suggestions of a conflict of interest.

Ms McDonald claimed that Mr Reilly clearly had a direct conflict of interest, because he has investments in private medicine and nursing homes at a time when public beds were being closed.

She described as a farce the addition by Mr Reilly of extra proposed sites for primary care centres.

Ms McDonald asked whether or not junior health minister Roisin Shortall was aware of the additional criteria, including competition, cited by the Taoiseach.

Mr Kenny insisted that extra proposed sites were added to put pressure on the medical profession to co-operate.

Fianna Fáil leader Micheál Martin criticised the addition of extra primary care sites, including two in the minister’s own constituency, saying that Ms Shortall “plays by the rules, but Minister Reilly doesn’t”.


MINISTER FOR Health James Reilly and Minister of State at the Department of Health Róisín Shortall will meet this week after she strongly restated her position in the row over the siting of primary care centres.

Tánaiste Eamon Gilmore yesterday indicated he was satisfied Dr Reilly’s decision to add two towns in his constituency to a priority list of locations based largely on deprivation originally drawn up by Ms Shortall was taken on a “balanced basis”.

Ms Shortall said all decisions must be made in a transparent way after the country had been “profiled” in terms of population and age as well as urban and rural deprivation.

“The guiding concern from my point of view is that resources go where they’re most needed, where there is established health need,” she said.

“We need to identify where are those areas of greatest need and we have very, very good information on that . . . It would be very foolish not to take heed of all of that important data that is available to us.”

She confirmed she had spoken to Dr Reilly yesterday and said they had arranged to meet later in the week.

Mr Gilmore said reports of feuding between the two Ministers were overdone.

“I think some of this can be exaggerated. I think that what we have to be clear about is what we’re trying to do here,” he told reporters in Brussels.


Transport Minister Leo Varadkar concedes that the decision to locate two primary care centres in the Health Minister‘s constituency “does look like” stroke politics.
However, he said that you had to trust your Cabinet colleagues to make the right decisions.
Dr Varadkar said that he trusted Dr James Reilly in that regard.
It looks like Varadkar is saying I admire your blatant ability to use stroke politics to strengthen your domestic nest. It also looks as if “Big Mouth” is saying it is time to go, Jimmie Boy.
The decision of Reilly in relation to the location of care centres has caused conflict between himself and Labour Minister of State Róisín Shortall. Dr. Reilly was asked to identify the politicians who had lobbied him in relation to the centres but a spokesperson acting on his behalf declined to respond.
Reading between the lines one suspects Leo might be saying that’s him sidelined in my quest for the top spot.

We also learn from this that stroke politics is alive and thriving under the umbrella of health.