CHALLAPATA – Standing beneath the Bolivian sun, it takes just one long look at the quinoa fields stretching as far as the eye can see, to understand why the Andean people call quinoa the golden grain.

“We also call it chisiya mama, which means ‘mother of all grains’ in the Aymara language,” smiles Valentina Rodriguez, a farmer from the Cotimbora community, in southern Bolivia.

Known for centuries for resisting difficult climate conditions, quinoa has always been grown in this region, near the Uyuni Salt Flatsin, in a stretch of highlands situated more than 3,700 meters above sea-level.

“My grandparents grew it,” remembers Valentina. For a long time, the golden grain was only found in the Andes. Today it can be found in organic meals around the world. Rich in protein, amino acids, mineral nutrients, vitamins and gluten free, this “pseudo cereal,” as it is called because it bears resemblance to grass, is actually part of the same family as spinach, chenopodium.

Popular in the U.S., Northern Europe and Australia, quinoa and its nutritious benefits go far beyond a simple organic trend. The U.N. recently launched the International Year of the Quinoa, saying the plant could help boost food security globally as well as fight malnutrition. This is one more reason why the so-called “super grain” has become so popular since the end of the 1980s – a trend that is benefitting Bolivia, its number one exporter.

Bolivia exported more than 26,000 tons of quinoa in 2012, providing 46% of quinoa consumed in the world. “Around 52% of the production goes to the U.S., 12.5% to France,” says Lucio Tito, director of the Bolivian Institute for Agriculture and Forest Innovation (INIAF), who is expecting record revenues of about 80 million dollars in 2013.

These record numbers are linked to soaring quinoa prices. In January, the royal quinoa reached $3,200 per ton on the international market, tripling in price in six years. “Our ancestors would not believe their eyes,” says Ciprian Mayorga, a producer from Salinas de Garci Mendoza, near Uyuni, who recalls the 1970s when 50 kilograms of quinoa would sell for 40 pesos — against more than 800 pesos today. “Since 2005, quinoa revenues have allowed us to build a small house in the town and send our children to school. This was impossible before,” says the 67-year-old farmer, who adds, “The rise in price has changed everything in the countryside.”

Everyone wants a slice of quinoa pie

Thousands of Bolivians have returned to their hometowns in the country to participate in the quinoa boom. Around Challapata, there is quinoa everywhere. “Before, the land was reserved for livestock, but today, it’s all quinoa,” says Antonia Choqueticlla, a seamstress who has been growing quinoa plants since she was six years old. “Before, it wasn’t worth producing but now the whole family has started growing it,” says Juvenal Romero, an inhabitant of Challapata who up until 2008 worked in a foundry, four hours away. “In six years, quinoa fields have doubled in Bolivia, exceeding 104,000 hectares in 2012,” says Lucio Tito. 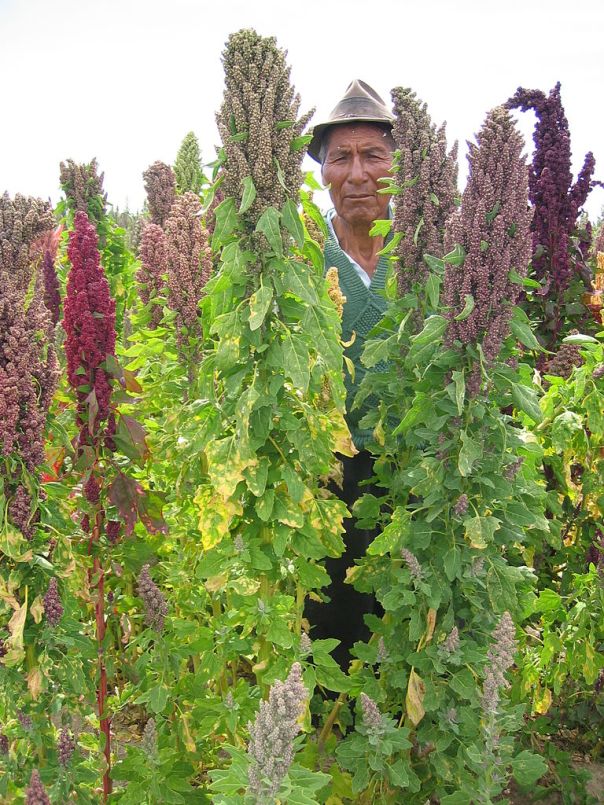 The intensification of crops, with the use of tractors, has worried researchers and authorities: “Farmers went from small, hand-planted plots on hillsides, to fully mechanized crops in the plains,” explains Thierry Winkel, an agro-ecologist from the French Institute of Research and Development (IRD), who led a study on the emergence of quinoa in the global economy. After four years of study, the IRD did not find any traces of soil depletion due to quinoa. “Yields are low, but this is mainly due to the climate and bad seeds,” says Winkel.

The National Association of Quinoa Producers (Anapqui) gives recommendations to its 2,000 members. For instance it advises producers to regularly rotate their land and to have a minimum of cattle per cultivated hectare. According to farmers, soil on the highlands that receive good manure can produce up to 30 quintals (3,000 kg) per hectare, against 10 (1,000 kg) otherwise.

“We remain vigilant in order to prevent the quinoa production from affecting our soils and our environment,” says Lucio Tito. According to him, Bolivia will limit the use of chemical products and excessive use of tractors in large properties. The INIAF is also aware that quinoa crops will continue to grow at the expense of other crops, which is something to keep an eye on. “In addition to the price increase, quinoa has the particularity of resisting climate change, a problem that is currently affecting potato crops,” explains Tito, who adds that quinoa can endure temperatures from -4 °C to 38 °C.

Quinoa is “highly adaptable” to different terrains, says the U.N. It is cultivated today in the U.S., Canada, England, The Netherlands, and since 2006, in the Loire Valley in France, far away from the Andean highlands.

Does this competition worry Bolivian producers? “All these varieties will never be able to rival our royal quinoa, that only grows around the Uyuni Salt Flats,” says the president of the Anapqui association.

Read the article in the original language.

All rights reserved ©Worldcrunch – in partnership with LE MONDE

via Quinoa: How Bolivia’s ‘Mother Of All Grains’ Became Hottest Organic Craze – All News Is Global |.

via Quinoa: How Bolivia’s ‘Mother Of All Grains’ Became Hottest Organic Craze – All News Is Global |.