Extraordinary that more are being turned down for disability allowance

Fianna Fáil are warning that two out of every three disability allowance applications to the Department of Social Welfare are being refused.

The party have issued figures showing that the amount of applications refused has risen from 54% in 2010 to 61% for 2011.

The party’s spokesperson for social protection, Willie O’Dea, says the latest figures show that this number will jump to nearly two thirds of all applications being refused for 2012.

And he says he doesn’t understand why the refusals keep rising: “In so far as people being turned down are concerned, there’s no change in criteria.

“Well if there’s no change in the critieria since this government took office, then it is absolutely extraordinary that many more people are being turned down for disability allowance.

I know of a person who is currently a full time resident of a mental health clinic with severe depression and bipolar. Has had it for over 10 years and is under the care of a consultant psychiatrist who helped them fill out the forms for disability and was turned down.

I can understand and want the government to have a strict criteria but they seem to be just turning down everyone. If a consultant is supporting their claim then who is some pen pusher to turn them down?

Reform the criteria if need be to reduce applicants but stop punishing the legitimate cases! Typical Irish Government. Rather then do a bit of work and properly assess people they refuse everyone and make them appeal. In the case of people who are suicidal with severe depression and the process taking over a year for application this can be thing to push desperate people over the edge.

O’Dea is a spoofer, looking for a soundbyte by the way but the point he is making is true regardless of his self serving motives.

via O’Dea: Extraordinary that more are being turned down for disability allowance | BreakingNews.ie.

via O’Dea: Extraordinary that more are being turned down for disability allowance | BreakingNews.ie. 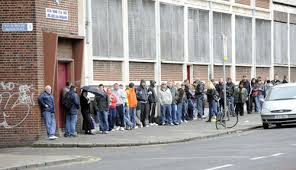 Troika will warn that “Croke Park is not working” when they conclude their eighth review of the bailout agreement, scheduled to begin next week.

These Government fears have not been eased by the intent of the Troika to focus on overspending in the Department of Health.

Such is the level of unhappiness within the Troika over the chaotic state of the Department’s finances that speculation was rife at the heart of Government that Minister for Health James Reilly would be personally cross-examined by the Troika.

Such a development would represent the first time a front-line minister from the three big spending ministries of Social Protection, Education and Health would directly meet the Troika.

To date, contacts between ministers and the Troika have been confined to the Brendan Howlin and Michael Noonan.

Though a spokesperson from the Department of Health said they were “not aware” of any such meeting, the Sunday Independent was told by senior figures close to Government that the Troika has become unhappy over the “peculiar” Irish situation where they only meet Ministers Howlin or Noonan, while other ministers are “corralled” away from the grouping.

In other bailout countries, the Troika meets ministers from all departments, but, in what was described by one source as “another example of the micro-management where Gilmore, Kenny, Noonan, Howlin and their Economic Management Council have to control everything” there has been “deliberate civil service and political resistance over letting Reilly, Quinn and Burton near the troika”.

However senior political sources told the Sunday Independent that the Troika has become increasingly impatient with the scenario where instead “of meeting ministers, they are being fobbed off by Father Sean [Healy] Richard Boyd Barrett , Sinn Fein and various others.”

One senior source claimed the Troika has been “spooked by Reilly. They’re starting to believe they are being given the run-around.

“Reilly is the sacrificial lamb, the boldest boy in class but they’re equally concerned at the hollowness in the centre of Government, a perceived lack of leadership.”