Was the proposed rule

And then came the assumptions

And the assumptions were without form

And the proposed rule was completely without substance

And the darkness was upon the face of the bankers

And they spaketh amongst themselves, saving

“It is a crock of crap and it stinketh.”

And the bankers went unto their Associations and sayeth,

“It is a pail of dung, and none may abide the odour thereof.”

And the Associations went unto the Sub-Committees

And sayeth unto them,

“It is a container of excrement, and it is very strong

Such that none here may abide by it.”

And the Sub-Committees went unto their Congressmen & Senators and sayeth,

“It is a vessel of fertilizer, and none may abide its strength.”

And the Congressmen & Senators spoke amongst themselves, saying one to another.

“It contains that which aids plant growth,

And it is very strong.”

“It promotes growth and is very powerful.”

And the Congressmen & Senators went unto the President and sayeth unto him,

“This new rule will actively promote the growth

And efficiency of all banks, and these areas in particular,

And will serve as a comfort and protection for our constituents.”

And the rule became

Science gets the last laugh on ethnic jokes 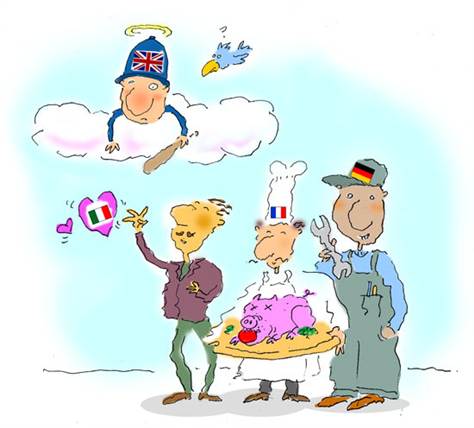 Obviously the national stereotypes in this old joke are generalizations, but such stereotypes are often said to “exist for a reason.” Is there actually a sliver of truth in them? Not likely, an international research team now says.

The study, which compares “typical” personalities in many cultures with the personalities of real individuals from those cultures, appears in Friday’s issue of the journal Science, published by AAAS, the nonprofit science society.

Generalizations about cultures or nationalities can be a source of identity, pride … and bad jokes. But they can also cause a great deal of harm. Both history and current events are full of examples in which unfavorable stereotypes contribute to prejudice, discrimination, persecution or even genocide.

“National and cultural stereotypes do play an important role in how people perceive themselves and others, and being aware that these are not trustworthy is a useful thing,” said study author Robert McCrae of the National Institute on Aging.

The researchers tested the possibility that cultural stereotypes might be based, at least partly, on real experiences that people have interacting with each other. If this were true, then such stereotypes would reflect the average personality of real members of that culture.

But, McCrae and his colleagues studied real and perceived personalities in roughly 50 countries and found that this wasn’t the case.

“These are in fact unfounded stereotypes. They don’t come from looking around you and doing your own averaging of people’s personality traits,” McCrae said.

How stereotypes are born

If national stereotypes aren’t rooted in real experiences, then where do they come from?

One possibility is that they reflect national values, which may emerge from historical events. For example, many historians have argued that the spirit of American individualism has its origins in the experiences of the pioneers in the Old West.

Social scientists such as psychologist Richard Robins have proposed several other possible explanations for stereotypes and why they may be inaccurate. In a commentary that accompanies the Science study, Robins notes that some stereotypes may have been accurate at one point in history and then persisted while the culture changed. Or they may have grown out of historical conflicts between cultural groups.

Yet another possibility is that some very specific components of a stereotype may be accurate — for example, Italians may gesture with their hands a lot — but that they don’t necessarily tell us anything more generally about personality.

We may be “hard-wired,” to some extent, to maintain inaccurate stereotypes, since we are less likely to notice and remember information that violates our stereotypes. Generally, according to Robins, when we encounter people who contradict prevailing generalizations, we perceive them as unique individuals rather than representatives of their national or cultural groups.

Researchers generally agree that the main components of anyone’s personality can be boiled down to five different aspects: neuroticism, extraversion, openness, agreeableness and conscientiousness. How a person rates in these five categories can predict many important life “outcomes,” such as health and mortality, academic success, job performance and the ability to have successful, lasting romantic relationships.

McCrae and his colleagues have developed a questionnaire that can be used to evaluate someone’s personality according to these five basic traits. It’s called the “Revised NEO Personality Inventory,” or “NEO-PI-R.” The survey results can be used to generate a profile of a person based on 30 specific characteristics that fall under these five larger categories.

The NEO-PI-R is widely accepted as an objective way to describe someone’s personality. People taking the survey can either rate themselves or someone they know well.

In the Science study, McCrae’s team began with two groups of NEO-PI-R surveys they had previously collected in a wide variety of countries. They averaged the profiles in each of the two sets, producing one profile that reflected how volunteers rated their own personalities and another profile that reflected how they rated the personalities of other individuals they knew.

The researchers also conducted a third survey in about 50 countries, using questions about the same 30 characteristics — but in this survey, they asked the volunteers to describe a typical person from their culture. They averaged these results, so that they had a third personality profile for each country, reflecting the national stereotype.

The authors found that in most of the countries, the two personality profiles that were based on information from real people matched each other reasonably well. But they were significantly different from the stereotype profile.

“There was essentially no agreement between people’s perceptions of the typical personality [in their culture] and what we actually measured,” McCrae said.

The one exception was Poland, where the ratings from volunteers provided a better-than-usual match between typical and real personalities, suggesting the volunteers were better at seeing past stereotypes to perceive people as they really are.

Perhaps in heaven, the therapists are Polish

via Science gets the last laugh on ethnic jokes – Technology & science – Science – Mysteries of the Universe | NBC News.

via Science gets the last laugh on ethnic jokes – Technology & science – Science – Mysteries of the Universe | NBC News.

What Religion Cares Most About the Homeless?

A homeless man “conducting a clever exercise in behavioral economics disguised as an inquiry into the levels of spontaneous generosity as determined by religious creed or lack thereof.” For the record, at last count, the atheists were winning. 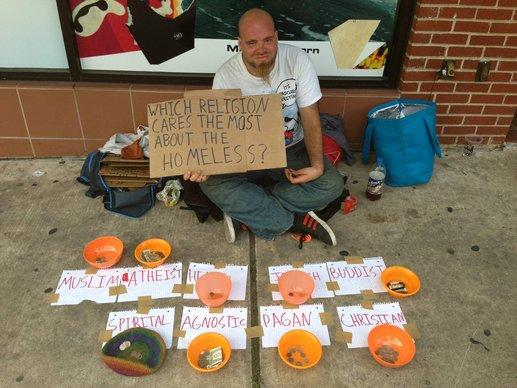 The world of literature has been stunned by allegations that massive numbers of words have simply gone missing from the English language.

‘In the 1960s we believe there to have been at least one million English words,’ said a spokesman for the Queen’s English Society. ‘Dictionaries that are currently available, however, list just a few hundred. It would appear that words may have been systematically removed, year by year, and copies of earlier dictionaries destroyed.

The UK government has strongly denied that they have been part of any conspiracy. ‘As people get older, their memories are not so reliable,’ said a government spokesman. ‘It is completely ridiculous to suggest that any language could ever have had a million words in it. That would represent more than ten different words for every six hundred men, women and children in this country. Ask any younger person,’ he continued, ‘and he or she will tell you that the same ten words are more than adequate to equip everyone for life, twelve if you count “dunno” and “innit”.’

‘Language is vital for the process of reasoning,’ countered a spokesman for one of the groups campaigning for the alleged word loss to be investigated. ‘We believe that successive governments have been complicit in reducing the vocabulary of the public to prevent them thinking too hard about controversial political decisions.’

Activists allege that the systematic removal of words has been obscured by educational policies that have kept young people unaware of the previous depth and diversity of the English language. They claim that teaching of English in schools has deliberately left those under fifty years of age unable to correctly spell any of the words in their own vocabularies and so has prevented them from noticing when other words have gone missing.

They argue that English educational policy since the 1970s has not been, as previously thought, a product of breathtaking ineptitude and incompetence; instead, that it has been a deliberate and cynical plot to control the minds of the people.

Conspiracy theorists have pointed to unfamiliar words being accidentally used by politicians as evidence that more English words exist than are officially recognised. They conclude that these words must have been drawn from a secret source, not available to the general public.

‘There are no secret sources of words,’ confirmed the Prime Minister to the BBC. ‘After all, there was no literature to speak of before the 1970s. All the fantasy about the existence of earlier writers that the conspiracy theorists talk about, such as this fictitious William Shakespeare, is just a figment of somebody’s imagination that has been blown out of all proportion by repetition on the Internet.’

The UK government has continued to try to allay fears about the alleged disposal of words. ‘If anyone should discover an old dictionary,’ concluded the Prime Minister, ‘then biblioclasm can be assured.’

Whilst this, of course, sounds reassuring, no one is quite sure what “biblioclasm” means.

via The Spoof : Literary World Stunned By Claims That Thousands Of English Words Have Gone Missing funny spoof magazine story.

via The Spoof : Literary World Stunned By Claims That Thousands Of English Words Have Gone Missing funny spoof magazine story.