The only known audio recording of James Joyce reading from Ulysses is to be auctioned at Sotheby’s in New York in June.

Recorded in 1924 and produced as a private venture by Sylvia Beach, who published the book two years earlier, the copies did not go on sale but were given to Joyce for distribution among family and friends. Two copies were also kept by Beach at her Shakespeare & Company bookshop in Paris.

The first mention of the recording seems to be in a 1935 Beach catalogue of Joyce material, where it was recorded with the following note: “Phonograph record of a reading by James Joyce from Ulysses pages 136-137, recorded by His Master’s Voice on one side only….Signed James Joyce, Paris, 17 November 1926 (date of recording). Only remaining copy of the 30 that were made.”

However, it is unknown if there were 30 or 20 copies made as Beach later wrote on the label of another example: “Only 20 copies were made of this record S.B,” writes the Irish Times.

In the recording, Joyce reads from a section of the Aeolus episode which takes place in the offices of the Freeman’s Journal – one of the main nationalist newspapers of the day. Joyce was forced to recite the whole section from memory due to his failing eyesight which led to a number of failed takes before a satisfactory recording was cut.

The 12-inch acoustic recording, signed and dated by Joyce, is being sold as part of an auction of rare books and literary memorabilia on 11 June, with a guide price of $15,000-$20,000. The recording was the first of 20/30 pressings, of which only two others are said to remain, and has apparently never been removed from its sleeve let alone played. It was described by Sotheby’s as a “true Joyce rarity.”

“This copy and the one offered in the Horowitz catalogue are the only examples we have been able to trace being offered in the last 30 years,” the auction house said.

“Our research indicates there are perhaps no more than two or three unbroken copies of this record extant and even shattered examples are almost unheard of in commerce,” reports the Irish Times.

Another Irish literary great represented in this year’s auction is Samuel Beckett, who was greatly influenced by Joyce and became friends with him in Paris in the late 1920s.

According to Reuters, the top estimate for Beckett’s “Murphy” manuscript currently lies at $2.13 million eclipsing even the $1.4 million which was paid for a partial draft of Joyce’s “Ulysses” sold at the start of the 21st century. 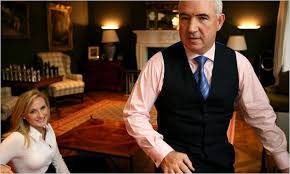