Revolutionary Posters of the Soviet Union 2

Five years later, during the war, Stalin’s face wouldn’t be featured on so many posters. The Russian people couldn’t forget the sinister policies, the sweeping purges, and the brutal coercion he had imposed upon them between 1935 and 1940 – which were hardly masked by images of utopia such as this.

We Will Eradicate the Agents of Fascism
Sergei Igumnov, 1937

We Will Eradicate the Spies and Saboteurs, the Trotskyist-Bukharinist Agents of Fascism.”

This poster was published on behalf of the NKVD – the Soviet Secret Police – during the infamous Show Trials in Moscow. Stalin went on to personally direct what became know as the Great Purge, and later as the Great Terror. According to the propaganda of the time, the purge was a cleansing of the rotten elements in his government. But in reality, he meant to systematically suppress the voices of anybody he perceived as a threat to his own power. It’s a scary thought: propaganda posters such as this one could be used very effectively to keep the tide of opinion in his favour, despite the bloodshed.

Just before WWII, the end of the Spanish Civil War had seen a Nazi-backed Fascist government come to power, after the irresponsible western powers, Britain and France, refused to offer military assistance to the Spanish Republicans. Many left-leaning writers and artists from the west, most famously George Orwell and Ernest Hemingway, had volunteered to fight for the Republican cause. The collapse of the socialist Spanish Republic, and the suffering endured by its citizens during the war, was an emotional subject for many Russians.

By 1941, not only Spain but also France, Belgium and the Netherlands had fallen under Fascist rule. This double-imaged poster contrasts the tragic fate of these western countries with the strong, stable and prosperous society established in Soviet Russia under Stalin.

To the Russians, WWII was known as the Great Patriotic War. Less than six months after the poster above this one was published, Germany had abandoned its former understanding with Russia, and invaded. Much of Germany’s eastern-front fighting over the next three years took place on Soviet soil…

My Son! You See My Plight…

Red Army soldiers knew that they had everything to lose in the war with Germany. Behind this old woman are the smoldering remains of the family home; she implores her son to save the country.

Soviet Union – Stalin like you have never seen him Before

The image of Stalin is similar for almost everyone. Today we want to show you the leader as a person who also had childhood and youth. This is how he was depicted by Georgian artists on their pictures.

“Childhood of Soso”. (real name of Stalin was Soso Dzugashvili). 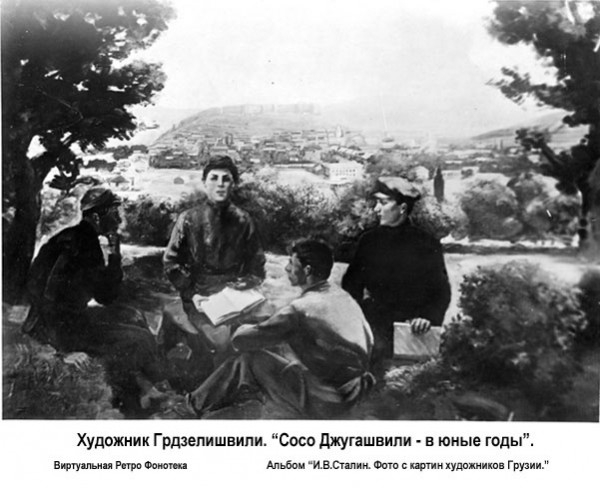 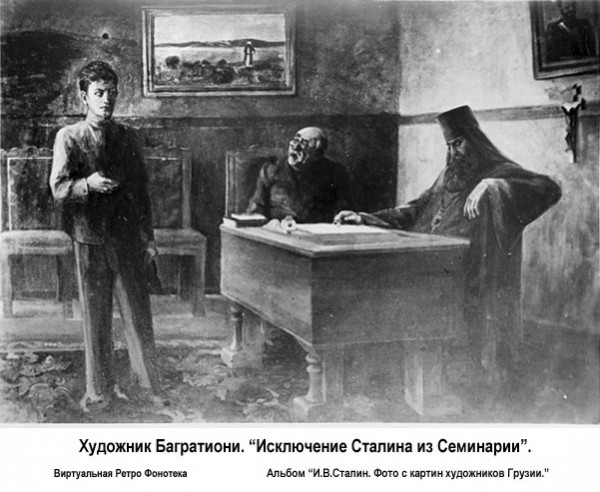 “Expulsion of Stalin from the Seminary”.

“Stalin talking to peasants from Adjara”. 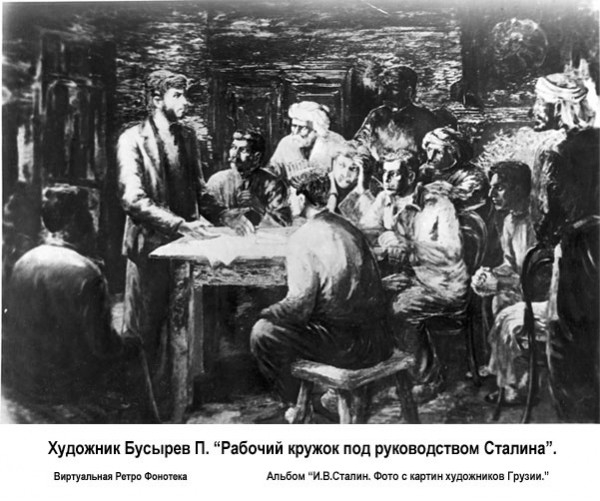 “Worker’s coterie under the leadership of Stalin”.

Stalin is delivering a speech.

“The ardent Colchian, being exiled, is reading a letter from Lenin”. 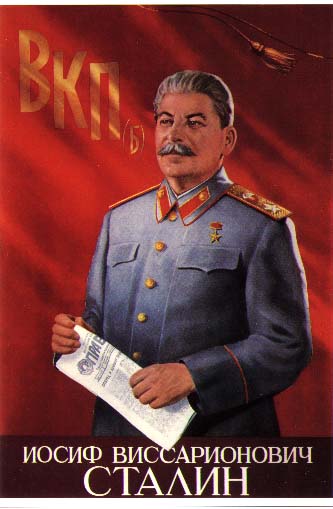 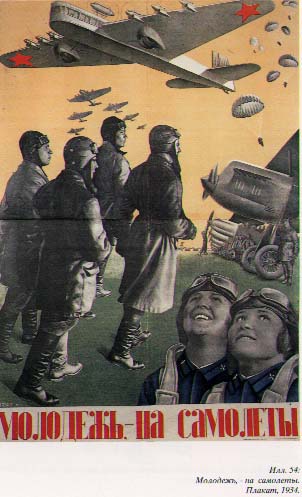 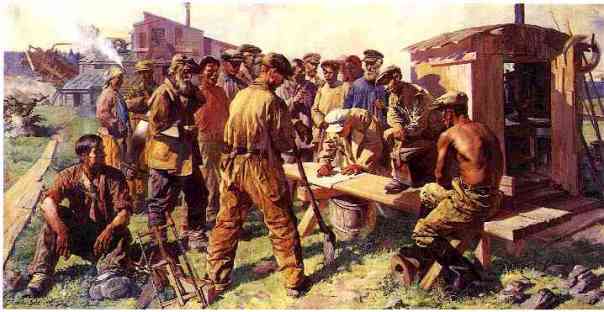 Under the leadership of the great Stalin – forward to Communism!

Glory to Stalin – to the great architect of communism! 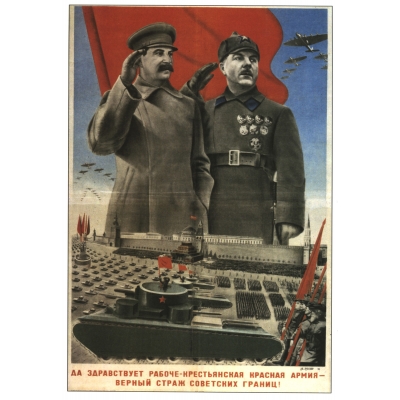 “Long live the workers’ and peasants’ Red Army – the true guard of the Soviet borders!” Gustav

Stalin in the Kremlin cares about each one of us! 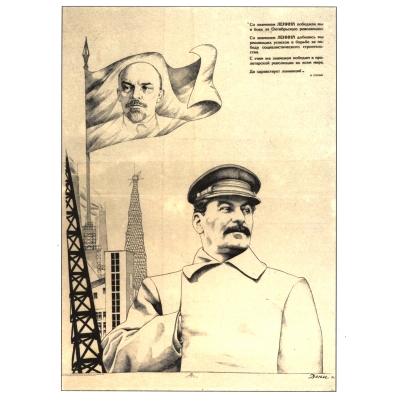 Do not speak out!

What does the Dalai Lama have in common with Joseph Stalin?

What does the Dalai Lama have in common with Joseph Stalin? A belief that he has the power and the right to make people happy. Yesterday a gaggle of happy-clappy academics, economists and politicians, backed by the Dalai Lama, launched a campaign called Action for Happiness, which will endeavour to make us Brits less gloomy and more perky by encouraging us to follow a cranky, sub-Oprah 10-point plan towards the Good Life. These happiness hawkers seem blissfully unaware of the fact that throughout history it has traditionally been the most authoritarian regimes, including Stalin’s, that promoted the politics of happiness.

Leaving aside the breathtaking banality and obviousness of the happiness gang’s 10-point plan (apparently you will be happier if you “focus on the happy moments of your life rather than the sad” and “have some purpose in your life”, etczzzz), what is most striking is the extent to which they reckon they know what’s best for us. They seriously believe that the entire populace, with our myriad problems and emotions and aspirations, can be led by the hand towards a one-size-fits-all definition of “happiness” as conjured up by them in their cut-off debates in some ivory tower. The message is clear: people are incapable of working out what is in their best interests, or even of managing their own emotions, and thus they need experts to colonise their minds and hearts and show them the way.

In the past, it was normally only tyrants who believed they had the power to “construct happiness”. They were keen on happiness promotion because they recognised that a placid, sedate, “officially happy” populace was less likely to protest, argue back or generally kick up a fuss about their lives and futures than an unhappy populace. So in the 1950s, Stalin plastered the Soviet Union with posters that said “Glory to the Great Stalin, the Constructor of Happiness!” Another, from 1949, said “Our Beloved Stalin is the People’s Happiness!” Stalin’s regime took pseudo-scientific measurements of so-called national well-being – not unlike today’s increasingly influential well-being lobby – in order to “prove” that the toiling, put-upon people of the Soviet Union were happy. Officially, at least.

In the 1930s, the Hitler Youth promoted “security, comradeship and happiness”. As Sebastian Haffner says in his book The Meaning of Hitler, Hitler saw it as his duty to “force the people into happiness”. There was a kind of “enforced happiness”, says Haffner, a term which might also be used to describe Action for Happiness’s belief that it can magically make us all happy by printing out and handing to us a Dalai Lama-approved guide to life. Kim Il-Sung, the founder of modern North Korea who died in 1994 (but who remains “Eternal President”), could probably have signed up to Action for Happiness – he also considered it his duty to “ensure the prosperity of the motherland and the happiness of the people”.

Political tyrants’ penchant for promoting happiness, for pre-empting dissent by constructing some BS notion of perfect social well-being, has not gone unnoticed by authors who have ridiculed or satirised tyranny. So in Aldous Huxley’s Brave New World, one of the big clashes between the authoritarian State Controllers and the antihero – known as “the Savage” – is over the issue of happiness. “I don’t want comfort. I want God, I want poetry, I want real danger, I want freedom, I want goodness. I want sin”, the Savage tells the State Controllers. “In fact, you’re claiming the right to be unhappy”, they respond. “All right then”, says the Savage defiantly, “I’m claiming the right to be unhappy”.

And so am I today. Not because I think miserabilism is good, but because I don’t believe the powers-that-be have the right to invade our emotional lives or the ability to make us happy. Happiness is not a script that we conform to; it is something we discover through our own lives and interactions. What’s more, unhappiness, an edgy feeling of dissatisfaction, a nagging belief that there could and should be more to life than this, is frequently the motor of change – both in people’s personal lives and in the social and political worlds. We should not let unhappiness be airbrushed from the social landscape, Stalin-style, by academics who patronisingly promise us that we will be happy if we just “go for a run” or “buy a cup of coffee for a stranger”.

via Like the rebel in Brave New World, I am standing up for ‘the right to be unhappy’ – Telegraph Blogs.

via Like the rebel in Brave New World, I am standing up for ‘the right to be unhappy’ – Telegraph Blogs.