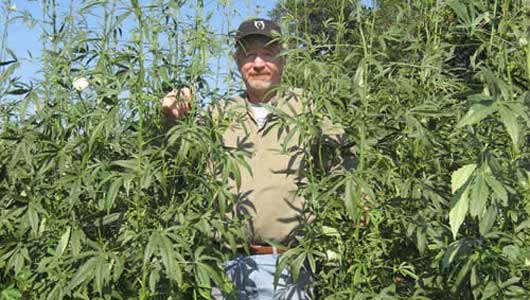 If someone were to tell you that they had a technology — a weed actually — that could sequester huge amounts of carbon permanently while lifting villagers out of poverty by providing both protein-rich food and super-insulated building materials, you might start to wonder if they were, well, smoking a different weed.

But it appears that one retired building contractor, Bill Loftus, has actually come upon a brilliant application of the fast-growing, carbon-sucking plant known as Kenaf. Kenaf is in the Hibiscus family and is thus related to both cotton and okra. Originally from Africa, this 4,000-year-old crop was used for its fiber. It has the astonishing ability to grow up to 14 feet in one growing season, yielding 6-10 tons of fiber per acre and making it a great source of pulp for paper.

But researchers have also discovered (PDF) a corresponding ability of Kenaf to inhale huge quantities of our most abundant global warming gas — CO2. We all now know we need to dramatically reduce our emissions, but even if we were to cut them by 50 percent in the next 10 years (an almost unachievable goal), we still have decades worth of CO2 that has yet to impact the climate. In other words, we need a technology that can actively pull CO2 out of the air and store it … permanently, now.

It turns out that Kenaf can absorb 3-8 times more CO2 than a tree. One acre of Kenaf can pull about 10 tons of CO2 out of the air per growing season, and in some parts of the world it can be cut back and regrown for a second season. With proper management, a single acre planted in Kenaf could absorb 20 tons of CO2.

But its not enough to simply absorb CO2. In order to create verifiable carbon credits, the CO2 must be sequestered permanently. This is where Bill Loftus comes in. Having worked for decades in the green building industry, he realized the abundant fiber of the Kenaf plant would be perfect as a filler to produce light-weight, super-insulating, fireproof concrete blocks that permanently sequester the carbon.

He patented the block, which weighs under 9 lbs, and is currently using it in two pilot projects in Haiti and South Africa, areas that have been hard hit by natural disasters and famine. The plant leaves are rich in protein (34 percent) and much-loved by chickens. So early in the season, it makes perfect feed in areas where feed is often not even available. The chickens in turn fertilize the soil and provide food for the villagers.

I still have a few questions — in particular about soil depletion and the invasiveness of the species — but I will be interviewing the CEO of Quantum-ionics, the distributor of the block, to get more answers. In the meantime you can check out Bill Loftus’ website and join his crusade to stop global warming, one kenaf plant at a time.

via Can 1 miracle plant solve the world’s 3 greatest problems? – StumbleUpon.