Monsanto Finance Holdings Ltd, an Irish-incorporated company with an address on Lower Hatch Street, Dublin, made a profit of €2.5 million in 2012 but paid no tax, according to accounts just filed.

Monsanto Finance Holdings is “exempt from all forms of taxation including income, capital gains and withholding taxes as it is tax resident in Bermuda”, the accounts state.

The firm has no employees and its three directors have addresses in Bermuda.

The firm’s balance sheet shows that at the end of August 2012 it had financial assets of €50.8 million. Accumulated profits at that stage were €53.3 million and shareholders’ funds were €103 million. The firm is owned by a Monsanto company based in Switzerland, and is ultimately owed by Monsanto of St Louis, Missouri, US.

Monsignor Nunzio Scarano is accused of fraud, corruption and other charges after the alleged Vatican plot

A Vatican official has been arrested over an alleged plot to take 20 million euro (£17 million) into Italy from Switzerland on board an Italian government plane.

Silverio Sica, lawyer for Monsignor Nunzio Scarano, said his client is accused of fraud, corruption and other charges stemming from the plot, which never got off the ground.

Mr Sica said that Scarano was a middleman in the operation. Friends asked him to intervene with a broker, Giovanni Carenzio, to return 20 million euro they had given him to invest.

Mr Sica said Scarano persuaded Carenzio to return the money, and an Italian secret service agent, Mario Zito, went to Switzerland to return it on board an Italian government aircraft.

He said the plot failed because Carenzio reneged. Carenzio and Zito have also been arrested

Spain’s High Court has turned down Switzerland’s request to extradite Hervé Falciani, the former HSBC Private Bank employee whose tax-evasion whistleblowing activities have become a cause célèbre. The French–Italian computer expert, who in 2008 made off with files detailing 130,000 of the Geneva-based bank’s clients, will not be required to return to Switzerland to face four charges relating to his data grab.

The court ruled that the principle of “double incrimination” is not satisfied in this case, meaning that the offenses of which Falciani is accused are not listed as such in Spanish criminal law. The Monaco-born IT expert was arrested in Switzerland – where he is accused of financial espionage, violation of the bank secrecy law, revealing commercial secrets and stealing clients’ private data – but he left the country, finally being arrested again in Spain last July.

The High Court in Madrid also considered that the information Falciani had facilitated to the tax authorities in France, Spain, Germany, Italy and the United States was related to criminal activities that are “in no way eligible for legitimate protection.”

Falciani, who had been released on bail for by the Spanish courts before his April 15 extradition hearing, is now free to travel outside Spain. Had the court ruled in favor of the Swiss request, the Spanish government would have had the last word on the extradition process.

Information released by the former bank employee has allowed the Spanish state to recover more than 300 million euros of lost taxes between 2010 and 2011, with further related investigations still in progress.

Top 10 Leaders in overall innovation performance as per the Global Innovation Index are:

The list of overall GII top 10 performers has changed little from last year. Switzerland, Sweden, and Singapore are followed in the top ten by Finland, the United Kingdom, the Netherlands, Denmark, Hong Kong (China), Ireland, and the United States of America. Canada is the only country leaving the top 10 this year, mirroring weakening positions on all main GII innovation input and output pillars. The report shows that the U.S.A. continues to be an innovation leader but also cites relative shortfalls in areas such as education, human resources and innovation outputs as causing a drop in its innovation ranking.

U.S. Prosperity Slides in Index That Ranks Norway No. 1 – Bloomberg 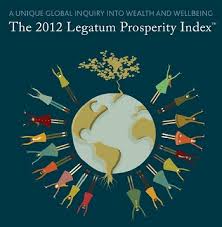 The U.S. slid from the top ten most prosperous nations for the first time in a league table which ranked three Scandinavian nations the best for wealth and wellbeing.

The U.S. fell to 12th position from 10th in the Legatum Institute’s annual prosperity index amid increased doubts about the health of its economy and ability of politicians. Norway, Denmark and Sweden were declared the most prosperous in the index, published in London today.

With the presidential election just a week away, the research group said the standing of the U.S. economy has deteriorated to beneath that of 19 rivals. The report also showed that respect for the government has fallen, fewer Americans perceive working hard gets you ahead, while companies face higher startup costs and the export of high-technology products is dropping.

“As the U.S. struggles to reclaim the building blocks of the American Dream, now is a good time to consider who is best placed to lead the country back to prosperity and compete with the more agile countries,” Jeffrey Gedmin, the Legatum Institute’s president and chief executive officer, said in a statement.

The six-year-old Legatum Prosperity Index is a study of wealth and wellbeing in 142 countries, based on eight categories such as economic strength, education and governance. Covering 96 percent of the world’s population, it is an attempt to broaden measurement of a nation’s economic health beyond indicators such as gross domestic product.

The Legatum Institute is the public policy research arm of the Legatum Group, a Dubai-based private investment group founded in 2006 by New Zealand billionaire Christopher Chandler.

The report shows that even amid the worst financial crisis since the Great Depression, global prosperity has increased across all regions in the past four years, although the sense of safety and security is decreasing amid tension in the Middle East and fear of crime in Latin America.

Norway and Denmark retained the pole positions they held last year in the overall prosperity measure, while Sweden leapfrogged Australia and New Zealand into third. Canada, Finland, the Netherlands, Switzerland and Ireland rounded out the top ten. The Central African Republic was ranked bottom.

In its sub-indexes, Legatum named Switzerland the strongest economy and home to the best system of governance. Denmark is the most entrepreneurial and New Zealand has the best education, while health is best in Luxembourg and Iceland is the safest. Canadians enjoy the most personal freedom and Norwegians have the greatest social capital.

With President Barack Obama and Republican challenger Mitt Romney tussling for the White House, Legatum said the U.S. economy declined two places from last year to 20th. It found that 89 percent of Americans believe hard work produces results, up from 88 percent last year, and the government’s approval rate dropped to 39 percent from 42 percent.

Plagued by the euro-area debt crisis, 24 out of 33 European nations have witnessed a decline in their economic score since 2009, according to Legatum. On the prosperity scale, Greece recorded the biggest drop in 2012, falling 10 places since 2009 to 49th. Spain held on to 23rd place.

The U.K remained 13th, one place ahead of Germany, and Legatum predicted it will overtake the U.S. by 2014 as it scores well for entrepreneurship and governance. Nevertheless, the status of its economy remains a weakness as it slid five places to 26th on that score and job satisfaction is low.

In Asia, Hong Kong, Singapore and Taiwan all ranked in the top ten for their economies and the top 20 overall. So-called tiger cub economies Vietnam and Indonesia also rose. Indonesia experienced the largest gain in prosperity of any country since 2009, jumping 26 positions to 63rd.

Switzerland, Norway and Singapore topped the economy sub- index, which measures satisfaction with the economy and expectations for it, the efficiency of the financial sector and foundations for growth. In a gauge of entrepreneurship, Denmark ran ahead of Sweden and Finland for the strength of innovation and access to opportunity.

Switzerland also topped the rankings for best government. It was followed by New Zealand and Denmark in a measure determined by the effectiveness and accountability of lawmakers, the fairness of elections, the participation of people in the political process and rule of law. The highest marks for education went to New Zealand, Australia and Canada.

Luxembourg, the U.S. and Switzerland were graded the best for health treatments and infrastructure as well as preventative care and satisfaction with the service. Iceland, Norway and Finland topped the chart for safety and security; Chad, Congo and Afghanistan ranked the lowest on that index.

Canadians, New Zealanders and Australians enjoy the most freedom and social tolerance, Legatum said. Norway, Denmark and Australia had the highest scores for social capital as monitored by social cohesion and family and community networks.

To contact the reporter on this story: Simon Kennedy in London at skennedy4@bloomberg.net