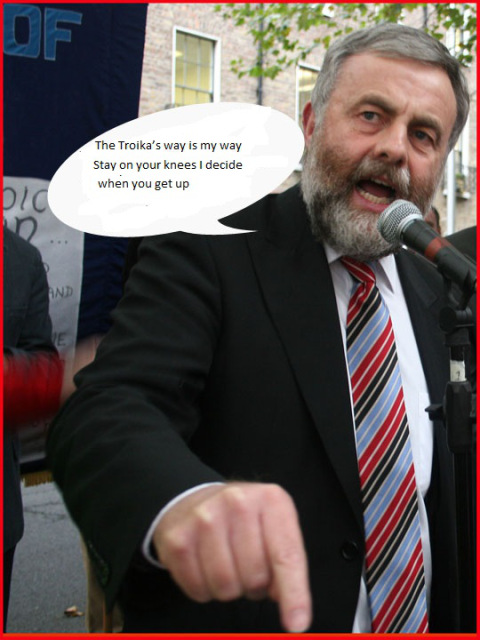 The Union bosses are the mafia that keeps the government in power and not the troika .These wolves in sheep clothing are nothing more than the real collaborators doing the biding of the faceless moneymen that allow the union bosses to extract enormous funds from their members and suck the country dry as they or their pals sit on the various guanos boards of course for hefty fees. The Union bosses are taking salaries equivalent to the Minsters of government and they have the perks and pensions to match. These sell-outs have betrayed the workers and the Irish workers are still like sheep following these leaches as they milk the insider system for all they can get.

Workers of Ireland wake up don’t you see these union bosses are part of the problem and are in no way going to rock the boat. They are out for themselves! Get out of these unions or kick out these puppets of the Labour party now.

These same union bosses have stood ideally by as our health services were  dismantled ,over the last 5 years they have done nothing for the ordinary man in the street they have watch and done nothing as new taxes were imposed on families to pay for private debts of corrupt bankers .These unions are nothing more than puppets of the political system , a extra insurance the government of the day has against workers going out on to the streets and demanding true democracy just like they have in Iceland. We need people power and not hidden planted insiders who run the unions on behalf of the government of the day.

The unions have abandoned the unemployed and they are out to keep themselves in their plumb top jobs! It is totally immoral that workers should be accepting Austerity while these sell-outs continue to pay themselves lottery salaries. When I hear of old folk dying in each other’s arms because they cannot afford to heat their homes I say it’s time to take the fight to the streets and kick these leaches off our backs now .Every decent worker should down tools and go on a general strike with or without the unions now. No more Austerity do as Iceland did tell the Government and their Union insider pals to get stuffed we don’t need their permission to take back our country from gangsters!

Have you ever wondered why Irish workers are not joining other European Workers in demonstrating against the imposed austerity that is paying the gambling debts of hidden faceless moneymen?

Simple: The union bosses are bought and paid for by the real power brokers who rule over us now!

via The Union bosses are the mafia that keeps the government in power | Machholz’s Blog.

via The Union bosses are the mafia that keeps the government in power | Machholz’s Blog. 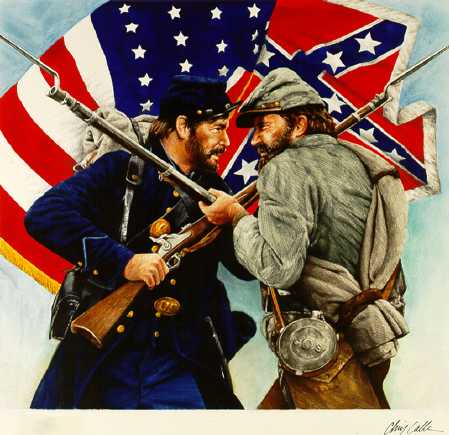 Citizens from more than 40 states have filed petitions with the White House seeking to secede from the union, and by Wednesday, seven states had gathered enough signatures to qualify for a response to the largely symbolic protest.

The petitions, which have been signed by a small percentage of state residents, have virtually no chance of succeeding. The United States’ bloodiest conflict, the 1861-1865 Civil War, erupted after 11 states withdrew from the union.

The White House has set up a “We the People” page on its website that allows Americans to file petitions on issues of concern. If a petition collects 25,000 signatures, the website says, the administration will review and respond to it.

The petition filed by Texas residents has racked up about 100,000 signatures. Six others from Louisiana, Florida, North Carolina, Alabama, Georgia and Tennessee have collected 30,000.

Among the seven states, only Florida gave its electoral votes to Democratic President Barack Obama in last week’s election.

The Texas petition says the United States is suffering from economic troubles stemming from the federal government’s failure to reform spending. It also complains of alleged rights abuses committed by agencies like the Transportation Security Administration.

“Given that the state of Texas maintains a balanced budget and is the 15th largest economy in the world, it is practically feasible for Texas to withdraw from the union,” it said.

A counter-petition has been filed calling for the state capital Austin to secede from Texas and remain part of the United States.

The country’s largest union has issued a warning to the Government regarding changes to public-sector allowances.

The full list has not been released, but it is thought to include a Gaeltacht allowance for nurses in Irish-speaking areas and a Locomotive allowance for senior gardaí who use their private cars for work.

They are set be abolished by the end of February.

However, Health Division Organiser at SIPTU Paul Bell said that they will not give up allowances they regard as part of their core salary.

“This is core pay, breach of Croke Park [Agreement], and whatever we have to do to protect our members’ pay we will do so,” he said.

“If people want to consolidate those allowances into pay, which we asked for many years ago, well then we’ll have that discussion.

“But we will not be getting into negotiations where we see the elimination or further cuts in people’s salary, that’s not where we are and we won’t be there.”

via Union pledges to do ‘whatever we have to’ after cuts in allowances announced | BreakingNews.ie.

via Union pledges to do ‘whatever we have to’ after cuts in allowances announced | BreakingNews.ie.