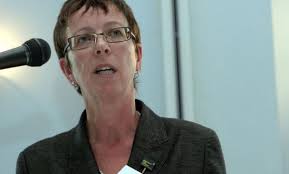 Katherine Allen is the Director of Amnesty International

As 2012 begins to draw to a close I will once again reflect on the people I have been privileged to meet. This year, two courageous individuals stand out, both indomitable figures in Burma‘s struggle for human rights. 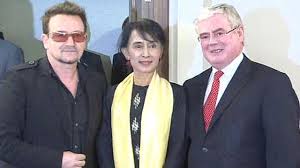 Both Daw Aung San Suu Kyi and Zarganar – one of Burma’s most famous comedians who poked fun at the government – dared to stand up and speak out for the people of Burma, and they did so knowing that they faced the prospect of abuse, harassment, arrest and long-term imprisonment. For Amnesty supporters it wasn’t just a privilege to be able to stand with these and other human rights defenders, many of us saw it as a necessity.

So when Zarganar took to the stage of the Secret Policeman’s Ball in New York earlier this year after having had his 59-year prison sentence commuted only a few months before, and Daw Aung San Suu Kyi received Amnesty International‘s Ambassador of Conscience Award in Dublin, making her first visit to the UK and Ireland in nearly 25 years, not only was I honoured to meet two of the bravest human rights activists of our time, I was also reminded of the indelible impact which the support and the solidarity of Amnesty activists can have in helping to achieve enduring positive change for others.

This is why I am so delighted that Amnesty International launches its Write for Rights Campaign today. Here is a wonderful opportunity to be able to voice our support and stand with women and men much like Aung San Suu Kyi and Zarganar; women and men who have bravely dared to defend their human rights even at the risk of persecution and harassment.

Featured in this year’s Campaign are the Pussy Riot duo who have been imprisoned for daring to freely express their opinion in Russia. They are currently facing years of imprisonment in arduous conditions in two separate labour colonies.

A brave young women’s movement in Afghanistan called Young Women for Change also features in this year’s Write for Rights Campaign, as does Azza Suleiman, a 49-year-old woman from Egypt who was seriously beaten by security forces in Tahrir Square during the uprising, after she went to the aide of another woman who was being beaten by soldiers. Azza was beaten so badly she now has a fractured skull and suffers from memory loss. This brave woman is now calling for the perpetrators of this abuse to be brought to justice, and we must stand with her.

We must also stand with Hakamada Iwao – one of the world’s longest serving inmates on death row. Hakamada has languished on death row for 44 years in Japan. Amnesty considers his case to have been unfair and is calling for a commutation to his death sentence.

The joy of meeting brave men and women like Zarganar is made all the sweeter in knowing that we have stood shoulder to shoulder with them in their darker days, even though we were thousands of miles away going about our own lives. On the days when it seemed as though there was no hope for them, Amnesty persisted in its support. Amnesty’s Write for Rights Campaign gives thousands of people throughout the UK the chance to send a message of solidarity, whether it be a letter or a card of support, or taking a photo in solidarity. It will only take five minutes to take action, but the impact could last a lifetime.

The days for the likes of Azza and Hakamada may seem dark now. But I urge you to join me in standing in solidarity with them now. Because when we see the success achieved for them, the joy is all the sweet

via Kate Allen: Just Five Minutes to Take Action, the Impact Could Last a Lifetime.

via Kate Allen: Just Five Minutes to Take Action, the Impact Could Last a Lifetime.