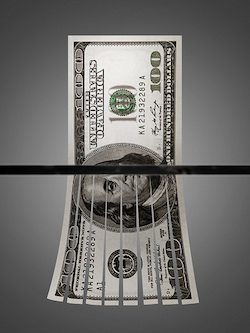 In 1649, a group of English communists started fighting the notion of private property in what became known as the commons movement. They were using the unstable period in England’s history to introduce a new economy, one that would see land, wells and other means of wealth as shared resources. This group would prevent a small class of people from collecting and consolidating the rights to basic human life, such as water and food. In an annual celebration that doubled as a protest, they would circle the village commons and level or dig up any hedges and fences that designated spots of private ownership. They became known as the “levelers” or “diggers.”

The movement, which was subsequently quelled in 1651 by landowners and the Council of State, has seen a revival in the past decade. It remained dormant for so many years because of its fundamental threat to modern economics, putting community needs at the center of society rather than those of the individual.

The commons protects large resources from privatization, such as the lobster fisheries in Maine or grassland management in Mongolia, and allows collectives to regulate extraction. Exploitation is avoided because no one individual has more of a right to the source than any other.

“[The commons]” is “an intellectually coherent way of talking about inalienable value, which we don’t have a vocabulary for,” David Bollier, author of “The Wealth of the Commons,” said in a conference Tuesday at the Heinrich Böll Foundation in Washington, D.C.

It is a way, Bollier says, of formally introducing the “political, public policy, cultural, social, personal, even spiritual” aspects of life into our economic system, which now, he says, can deal only with monetary value.

“You could say that it’s a different metaphysics than that of the modern liberal state,” he says, “which looks at the individual as the sole agent.”

The commons movement is a reaction to exploitative free market capitalism. It rejects the notion that resources, spaces and other assets are purely a means to wealth. It condemns the privatization of public works, such as the parking meters in Chicago, which allows the sovereign wealth fund that controls it to increase the rates.

When an economy allocates wealth to private entities, Bollier says, those property rights inevitably get consolidated until a few large institutions control its means.

Instead, he says, we need to protect the commons with rules that bar individual ownership of that property. It is not, however, a space that is left as a free-for-all; it still has regulations and state recognition that prevent private groups from exploiting it.

The commons introduces a “role for organized self-governance as opposed to government,” Bollier says, “although they can be made complimentary.” The community manages the resource and has an involved interest in keeping others from decreasing its supply, he says, because the license belongs to the public.

But the commons is not restricted to natural resources—it extends to the Web, science and other technologies.

The Internet has become the setting for a fierce battle between public advocates that would like to designate forums as open and free, and companies that seek to control more of its content through bills like the Stop Online Piracy Act (SOPA) and the Protect IP Act (PIPA). Many programmers have handed over their copyright ownership to the public in the form of General Public Licenses and Creative Commons licenses, which allow the public to use and contribute to forums without having to pay for usage. It also keeps companies from using personal information, as with Facebook, to target potential consumers.

Additionally, one-fifth of the human genome is privately owned through patents. Salt Lake City-based Myriad Genetics, for example, owns the breast cancer susceptibility gene, which guarantees monopoly control over research into cancer. It discourages many other researchers from exploring treatment, something that could ultimately stunt our capacity for medical advances.

“Enclosure,” Bollier says about patents and private ownership, “is about dispossession. It’s a process by which the powerful convert a shared community resource into a market commodity … This is known as development.

“The strange thing about the commons is that it’s invisible because it’s outside of the market and the state,” Bollier says. “It’s not seen as valuable and isn’t recognized because it has little to do with property rights for markets or geopolitical power … but there’s an estimated 2 billion people around the world whose lives depend upon commons like fisheries, forests, irrigation water and so forth.”

The neoliberal market does not, paradoxically, grasp the purpose behind the commons. Our current system is one-dimensional, Bollier says, and is designed to attach a price to everything.

For years, sustainability experts have sought ways to incorporate moderation and conservation into the neoliberal model through such incentives as cap and trade. But companies, Bollier says, will pay the extra fees until it is no longer economically viable, proving that in a system of privatization, people are willing to shell out penalty payments as long as they do not disrupt their profits.

“There’s an allure in trying to meet microeconomics and neoliberal economics on its own ground,” says Carroll Muffett, moderator of the discussion and president of the Center for International Environmental Law, “to say ‘if you want to put a price on everything, here’s the price for this and look how massive the price is,’ whether it’s access to water or it’s pollination … but for me the danger is: Is meeting them on their own ground what we should be doing? Is there an inherent compromise in there that risks giving up something that ultimately cannot have a value put on it?”

Until recently, Bollier and Muffett say, there has been much wiggle room for the free market to expand. But as the basic needs of fresh water, energy and food are being overproduced or vanishing because of climate change, companies are finding that their only options are to draw from the scant resources of Third World communities to meet their profit margins. It is a test to see what, in the end, neoliberalism holds higher in value: money or life.

Muffett says that question has already been answered in the building of the coal-fired Medupi Power Station in South Africa. An assessment of the power station projected that there wouldn’t be enough water to keep the plant operating and meet the needs of the local community. The watershed adjacent to the plant is already so overtaxed that it doesn’t reach the sea. The company, Eskom, proposed to reroute water from another watershed for its main operation and use the local supply for its filtration system. It would raise the price of water for the community to keep “poachers” from draining the source.

“The water that’s being poached,” Muffett says, “is to give people access to fresh water and to water their crops for subsistence living.

“Putting a price on that for a community is ultimately missing the point. The water isn’t fungible. If I give you my gallon of water and you give me $1,000, I can’t drink the thousand dollars.”

Both Bollier and Muffett say this is the result of an economy based on the philosophies of Thomas Malthus and John Locke, whose models do not guarantee the right of existence. To exist, one must have money. It becomes the defining characteristic of life.

“That’s the risk in the natural capital approach,” Muffett says. “It’s saying ‘if you give me a thousand dollars, that’s a substitute for my bees, my pollinators, for the land where my ancestors are buried.’ And there is no substitute for that.”

This article was made possible by the Center for Study of Responsive Law.

via An Economic Alternative to Exploitative Free Market Capitalism – Truthdig.

via An Economic Alternative to Exploitative Free Market Capitalism – Truthdig.