← Of GM food crops, Bt cotton and an honest committee in India
Edward Snowden has documents on how to evade NSA surveillance, journalist says → 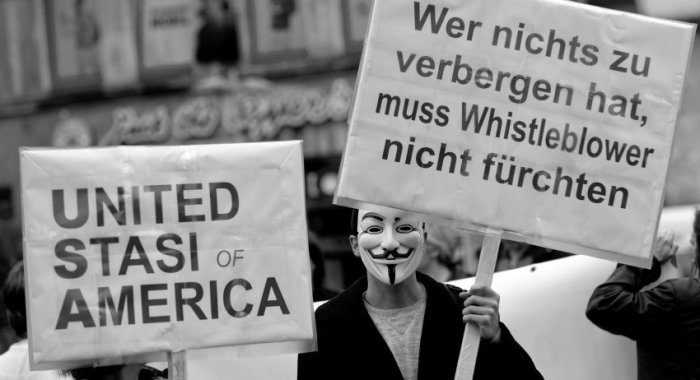 A protester in Hanover, Germany, holds up a sign on Saturday reading: “The United Stasi of America,” a reference to the feared secret police in totalitarian East Germany. A second sign states: “Those with nothing to hide should not fear whistleblowers.” Photo: Der Spiegel/DPA

In an important news report, ‘How the NSA Targets Germany and Europe’, Der Spiegel has reviewed a series of documents which prove that Germany played a central role in the NSA’s global surveillance network – and how the Germans have also become targets of US attacks. Each month, the US intelligence service saves data from around half a billion communications connections from Germany. 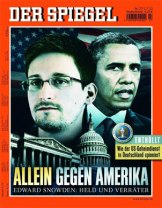 According to the listing, Germany is among the countries that are the focus of surveillance. Thus, the documents confirm that the US intelligence service, with approval from the White House, is spying on the Germans, said Der Spiegel, and possibly right up to the level of the chancellor.

Britain has been revealed as the junior partner in this Orwellian scheme. But the European Commission has reacted swiftly and strongly. In a letter to UK Foreign Secretary William Hague, the Commission vice-president Viviane Reding requested detailed clarifications about the scope of the UK’s spying practices and even hinted at legal action.

The new aspect of the revelations isn’t that countries are trying to spy on each other, eavesdropping on ministers and conducting economic espionage. What is most important about the documents is that they reveal the possibility of the absolute surveillance of a country’s people and foreign citizens without any kind of effective controls or supervision. 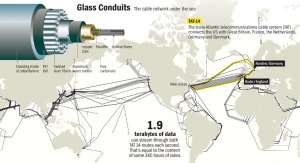 Many high-ranking European officials have issued statements of outrage and protest against America’s spying. These representatives of the European ruling class pretend surprise at the revelations but have no doubt acquiesced to, authorised or supported similar surveillance of their own populations and of their American counterparts.

Nevertheless, the unanimity of the response is an indication that European governments have been goaded into voicing the concerns of their citizens. The US dragnet of telecommunications and the internet over Europe has never been so visible, as are now, thanks to Edward Snowden, US efforts to persecute those who have brought the spying to public notice.

In the USA, the slavish corporate media has condemned Snowden’s actions. Witness a representative reaction in theNew York Times, for whom Snowden is the product of an “atomised society” and lacking “respect for institutions and deference to common procedures”! This daily newspaper, like others in its pettyfogging class and like the American national television channels, bloodthirsty and war-mongering now for a decade, has ignored the point made bluntly by the American Civil Liberties Unionthat these “institutions and procedures” long ago lost their claim to respectability.

Britain has been cast even further into Europe’s data protection wilderness after revelations that its formerly glorious signals intelligence agency GCHQ has been monitoring web and telecommunications on an even greater scale than the NSA. Germany’s justice minister, Sabine Leutheusser-Schnarrenberger, has demanded explanations from her British counterpart, asking whether the 30-day retention of signals data is based on concrete suspicion or is warrantless (guess which?).

← Of GM food crops, Bt cotton and an honest committee in India
Edward Snowden has documents on how to evade NSA surveillance, journalist says →